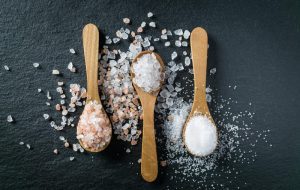 Kitchen Tips: The Difference Between Table Salt and Himalayan Salt

Salt is the most popular and common food enhancer (or spice) on everyone’s table. It’s also the leading ingredient in most foods as a preservative. There are many people who have turned away from salt believing it can lead to health issues. The reason sale ti commonly used in foods for flavor, it’s cheap!. The consumption of salt has certainly gotten out of control over the years causing many people in the medical world to believe it’s led to health issues. Sodium is the main component found in salt but it’s also an essential nutrient for life, according to the American Heart Association but only recommends 2,300 milligrams per day. The Association said that 70% of the level of sodium comes from packaged foods, not from your salt shaker.

Recently, the conversation has focused more on different salts including the less known Himalayan .pink salt. Salt has only been around for approximately 100 years. Before then, salt was a very rare commodity that wars were fought over! Since then, the popularity of salt increased due to mining, manufacturing, transportation, and the ingredient chosen by chefs. Even with the introduction of many international recipes, and the many different salts to choose from, most people have no idea there is a difference between your common table sale and Himalayan pink salt. The leading questions include – Do they both have the same level of sodium? Does Himalayan salt have beneficial nutrients that your table salt does not?

If you have shopped for Himalayan salt, you know it’s more expensive than table salt but, otherwise, is there really any difference between the two?. To begin with, table salt has iodine for thyroid health and anti-caking ingredients to allow for an even flow. Himalayan pink salt has traces of minerals including potassium, calcium, and magnesium not found in table salt. That said, the level of minerals is really quite low by the nutritional labels for Himalayan salt which offers zero percent of the daily value for each nutrient. On the other hand, Himalayan salt has undetectable elements including arsenic, uranium, and lead!

The difference between the two salts is actually insignificant. The USDA stated that table salt has 581 milligrams of sodium per ¼ teaspoon and Himalayan pink has 388 milligrams of sodium per ¼ teaspoon. The difference is due to the fact that the Himalayan salt is courser than table salt and both are the same in weight. It comes down to your personal preference but whichever you prefer, use moderately.