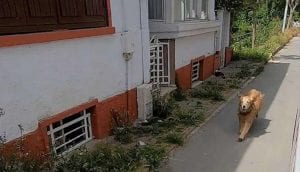 Dog Follows Ambulance Carrying Owner All the Way to Hospital Pets are truly loyal and caring animals. When we give them the time they deserve, the love they crave, and the food they need, a pet will follow you to the ends of this planet. That was proven when an individual was taken to a hospital in Turkey and his dog followed the ambulance all the way to the hospital.

The owner was in serious trouble, and the dog could sense it – so he made sure to stick by and be there for his beloved owner and friend. The gorgeous dog was noted by Turkish news agency TRT Haber as having followed the owner all the way to the hospital. Based in the city of Buyukada, the individual was put into an ambulance and taken to hospital. Her dog, though, was not allowed to come along on the trip – the canine, though, was having none of it.

Take a look for yourself and see the true levels of loyalty that a dog can show!

Instead, it followed behind and got to the hospital to make sure that their beloved owner and friend would be OK. The dog was welcomed into the hospital and watched by staff until the owner received treatment – while details are sketchy on what happened next, we hope that the owner pulled through and both person and pup are back home, OK and safe.